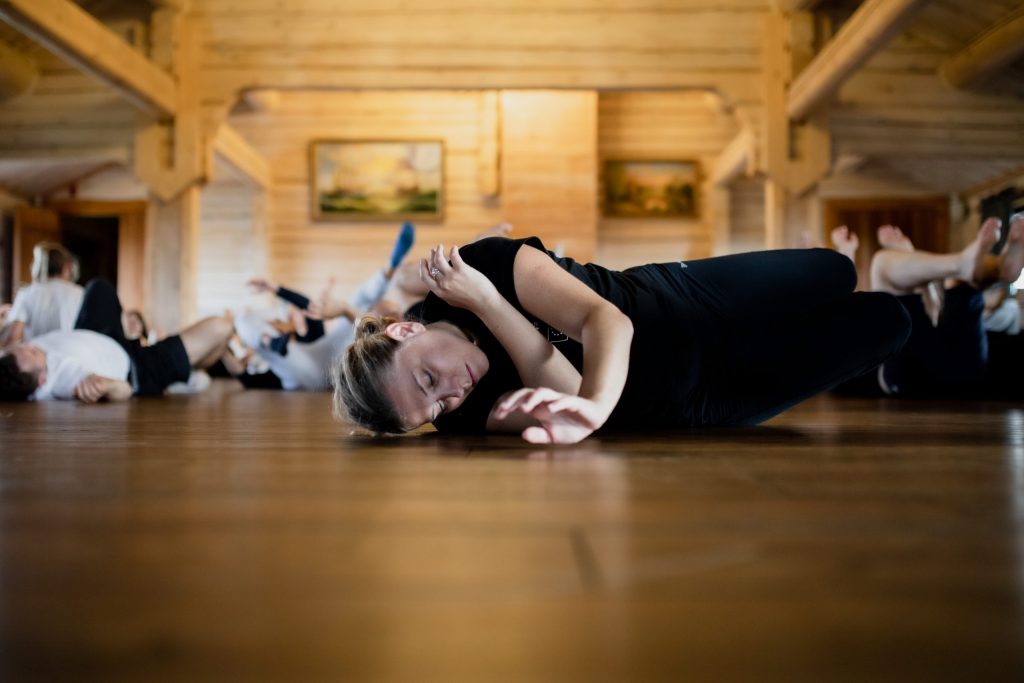 Actors of the Alytus City Theater as well as light and sound specialists are currently improving their skills at the School of Performing Arts. This is the first activity of the currently ongoing Interreg project “Building Bridges: Tourism and Culture Development in Sovetsk and Alytus Regions”, which is organized by Alytus City Theater.

The staff of the partners, the Kaliningrad Region Youth Theater „Molodyozhnyj“, who could not come to Lithuania to attend the master school due to the coronavirus, was not left out – they participate in the training remotely and claim that it is a valuable experience for them.

Meanwhile, the situation provided a great opportunity for young lovers of performing arts, young actors of Alytus City Theater studio „Taškas“, to join the theater and gain experience that can be used in other project activities – creative youth camp and laboratory, where Alytus residents are planned will meet, get acquainted and work together with the creative youth of Sovetsk.

Olga Polevikova, a teacher, lecturer, director of the Russian Drama Theater, and a lecturer at the Lithuanian Academy of Music and Theatre, revealed the importance of language to the participants of the art school and noticed that as the social circumstances change, the theater changes the stage language first. Asked to explain what stage language is, the lecturer said that „it is the ability not to anticipate the possibilities of voice and speech from the actor’s entire creative work, but to make the voice an ally.“

Evaluating the work in this school, the lecturer noted the openness of the Alytus Theater troupe. “For me, as an educator, it was a precious time that gave me the opportunity to work with an open team that is not afraid to play and make mistakes with you. Such a way leads to experiment and discovering the new things. For me, it was a very safe space for research, ”O. Polevikova shared her thoughts, claiming that working in this camp became a three-day meditation.

The week-long school allowed the actors, along with choreographer Marius Pinigis, to feel their own bodies. Marius did not spared good words to the actors, saying that a lot of enthusiastic people met here, where the mood and atmosphere were good and the concentration and willingness of the training participants to work was obvious.

“We often see our bodies as a means of transportation, but my creative workshops have allowed me to arouse a desire to change that understanding. The three-hour workshop, which lasted for several days, allowed to reveal the feeling of the body, fatigue, muscle pain, and the arousal of creativity became an episode of returning to the body, ”says M. Pinigis, who undoubtedly emphasizes the importance of such training.

There is another experience that awaits the actors – a creative workshop with improvisation virtuoso Kiril Glushayev. Speaking about the benefits of theatrical improvisations for the theater community, the actor and director noticed that what the actors will gain will be passed to the audience. “Although we all improvise, because life itself is improvisation, not everyone can improvise professionally on stage. This requires a good teacher, dedication, long-term work, understanding and knowledge of the mission of the activity „, K. Glušajev shares his thoughts, noting that working with the theater troupe is not difficult, because the theater actors are ready for training very carefully. He was surprised by their curiosity and openness.

While theater actors learn the secrets of performing arts, stage sound and light professionals speak a language they understand more. Sound director Laurynas Milinis, light artist Darius Malinauskas share the secrets of their professionalism, lecturer Alius Mikelionis talks about the possibilities of video on stage and in the advertising of cultural products, and Gintautas Stonys presents the possibilities of lasers on stage.

The international project made it possible to organize a „School of Performing Arts“, the benefits of which are unquestionable. “It would probably be very difficult to describe the benefits that the Alytus City Theater Troupe received during the activities. The three best specialists in their field shared theoretical and practical knowledge and experience throughout the week. How to give up the feeling of fear, guilt or shame on the stage, how not to be afraid to make a mistake, and when you make a mistake, to turn the whole situation into a situation that is favorable for you and extremely attractive to the audience? How to know your body, make it sound to all, even the smallest cells of it, how to release sound even in the most awkward physical position? How to express an idea with the help of movement, how to fill a large space with the body, what is the lexicon of a modern dance? Such and many other questions have been answered or sought in workshops and seminars, and the tools gained during it will serve the actors in the future – on stage and in daily rehearsals”says Inesa Pilvelytė, the local coordinator of this project, stating that partners from the Tilsit Theater are also happy with the benefits of the theatre.