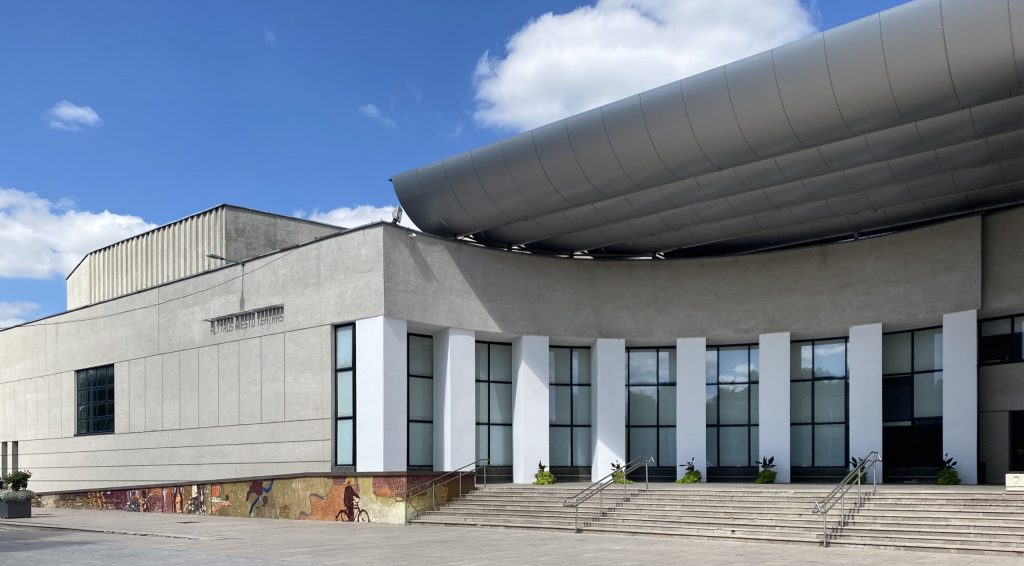 The last years have been successful for Alytus City Theater. The international project of the European Neighborhood Instrument Lithuanian-Russian Federation Cross-Border Cooperation Program “Building Bridges: Development of Tourism and Culture in the Sovetsk and Alytus Regions” for 2014-2020 was won. The two-year project is being implemented together with partners – Kaliningrad Region Youth Theater „Molodyozhnyj“.

The neighborhood brought together for common work

Alytus and Sovetsk are just over two hundred kilometers apart. Both cities can enjoy their cultural traditions and developing tourism infrastructure. The cities are brought even closer by activity of the theaters in Alytus and Sovetsk, which have already become a center of attraction for locals and visitors.

Friendship with Tilsit Theater began a few years ago. „Then the Sovetsk theater was looking for partners and their message reached us,“ says Inesa Pilvelytė, the local coordinator of the project „Building Bridges: Development of Tourism and Culture in Sovetsk and Alytus Regions“. “It so coincided that at that time new managers that were full of ideas had started working in both theaters, so an active direct connection was established quickly. During the visits, the creative teams of the theaters met, and the EU-funded Lithuanian-Russian Neighborhood Program allowed us to work together to create and win a joint project and achieve the desired goals”, – I. Pilvelytė shares her thoughts on the friendship between the theaters.

In implementing this project, both partners seek to develop cultural tourism, which encourages people to travel, get acquainted with local and foreign culture, visit art institutions, participate in events, meetings and events. Creating sustainable enduring cultural value can fill the seasonality of tourism that is felt in the region.

From creative labs to culture days

The project includes a wide range of activities that will be of interest to the local community, visitors that visit the city as well as theater staff and creative young people.

Already in the middle of August, the „School of Performing Arts“ will start, where Alytus City Theater actors, stage lighting specialists, sound directors and video technicians will improve their mastery. Members of the theater troupe have the opportunity to learn from the best specialists in their field: lecturer, choreographer, pedagogue Marius Pinigis will lead the stage movement workshop, lecturer Olga Polevikova, director of the Russian Drama Theater, actor and director will share the secrets of theatrical improvisation, the secrets of theatrical improvisation will be shared by actor and director, improvisation virtuoso Kiril Glushayev. The technical staff of the theater will improve their knowledge in the field of stage sound and stage lights, will get acquainted with the possibilities of creating and using video on stage and in advertising, and the possibilities of using lasers on stage.

It is planned to organize professional lessons in Lithuania together with partners from Sovetsk, but the world covered by the coronavirus adjusts such opportunities, so meetings with lecturers and trainings for them will take place remotely.

Meanwhile, places of the partner participants at the School of Performing Arts will be taken by the local youth that will later participate in the professional trainings. These are young actors of Alytus City Theater studio „Taškas“, who will later join a creative youth camp and laboratory.

„We will not run away from theater activities,“ says the project coordinator in Lithuania. “During this year, two new visual, attractive performances will be created within the project. European funding will make it possible, we will be able to realize our dreams, which we usually are not able to do with our budget“. The performances created by Alytus City Theater and Tilsit Theater will be presented to both the local community and the audience of the project partner.

Lithuanian and Russian culture days organized in both countries will allow to get acquainted with the rich Lithuanian and Russian culture and traditions. „Presenting the Lithuanian Culture Days in Sovetsk, Kaliningrad region, we will also invite to travel and present the culture of Alytus city the representatives of other cultural organizations and travel agencies, who would be able to establish long-term cooperation relations with the partners of the neighboring country“,  says I. Pilvelytė. There is a hope that this project will lay the foundation for stable and strong cultural ties between the cities of Sovetsk and Alytus.

Alytus City Theater together with partners Kaliningrad Region Youth Theater „Molodyozhnyj“ winning the project „Building Bridges: Development of Tourism and Culture in the Sovetsk and Alytus Regions“ opens up much wider opportunities. According to the local coordinator of the project: “It means a lot to our theater. Funding this project could be compared to two years of our income. Imagine how much we will be able to do and create!”, I. Pilvelytė is happy, naming the works already started, including the creation of a representative film about Alytus City Theater, publishing theater book reviewing the history of the theater, people and events, photo exhibition and other ideas for the 30th anniversary of the theatre.The project LT-RU-2-063 „Building Bridges: Development of Tourism and Culture in Sovetsk and Alytus Regions“ is funded by the European Union. The total budget of the project is EUR 573,856.81, the share of Alytus City Theater in the budget is EUR 267951.84. Project duration – 24 months. ]