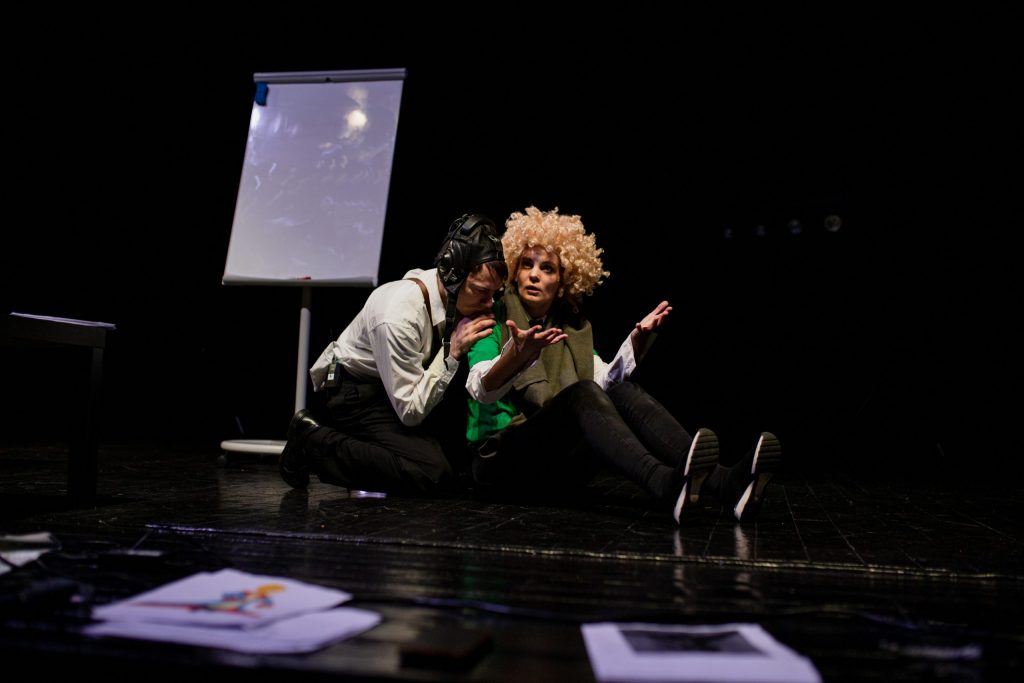 Although the raging COVID-19 pandemic and the quarantine restrictions closed the doors of the Alytus City Theater, as well as other cultural institutions, but the work is still going on. Audience will see it when they return to the normal course of life and the thirst for culture will be quenched by live meetings and events. As part of the international project “Building Bridges: Development of Tourism and Culture in the Sovetsk and Alytus Regions”, a creative laboratory was organized at the theater. 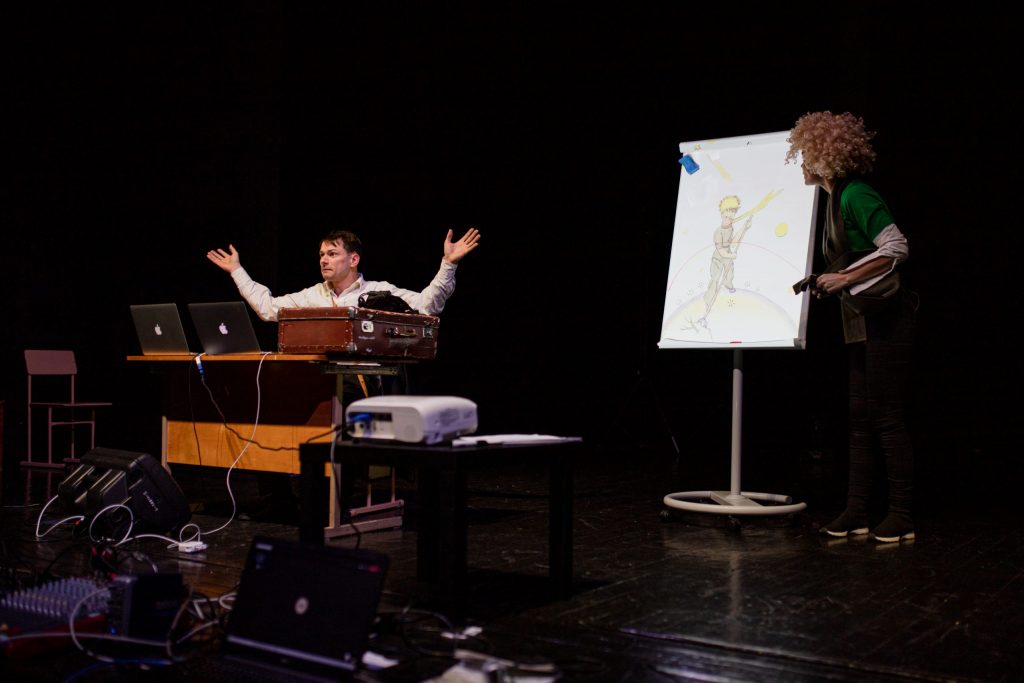 Already in the summer, the actors and technical specialists of Alytus City Theater improved their capacities with the help of the technologies. So the creative lab now also took place both directly and remotely. During it, the actors of the theater worked with Lithuanian and project partners’ directors to create stage sketches. At the same time, light and sound specialists, professional scenographers and other theater workers contributing to the birth of the theatrical product shared their experience.

“When choosing the theme of the creative laboratory, we decided to analyze the theater for children,“ said Inesa Pilvelytė, director of Alytus City Theater and project coordinator. “Participating directors was asked to choose a work of world literature and create a stage sketch based on it.“

During the week-long laboratory, a guest from Tilsit Theater, director Alesandr Zagoraev, worked remotely in the creative laboratory. „It’s not easy, but it’s really possible and very interesting,“ he said, co-creating a stage sketch with the actors based on de Saint-Exupery’s „The Little Prince.“ 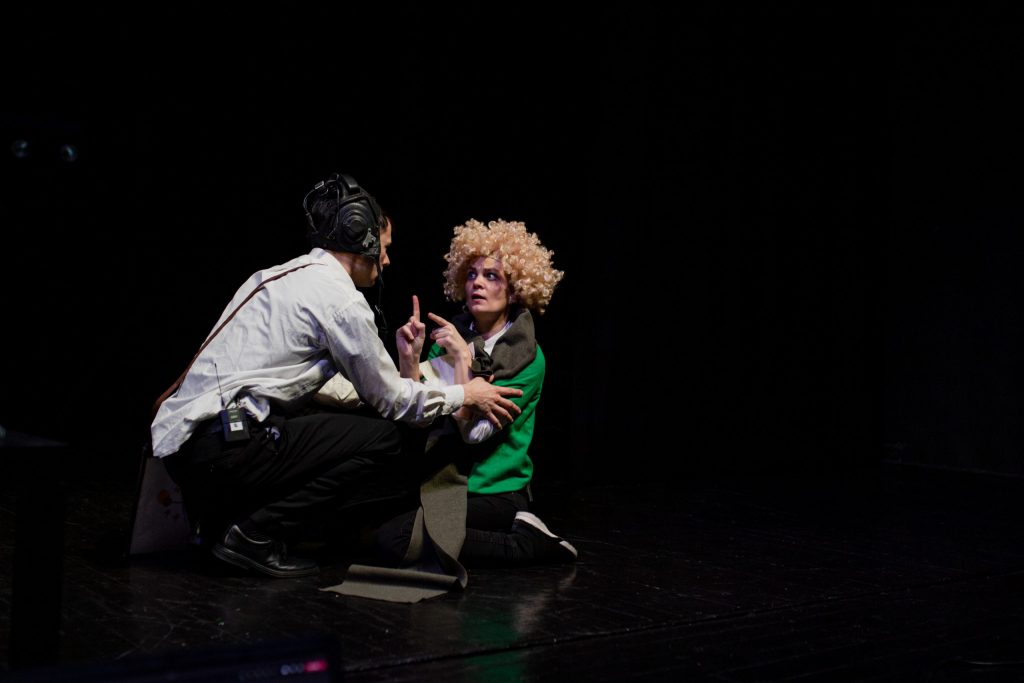 This piece was chosen by the director based on the fact that it is understood by the actors and the director himself, and is also included in the schools curricula in both countries.

The director noted that the creative laboratory is first and foremost a process, experience and discovery of new things.

“I really like this lab. It’s not easy, it’s hampered by a language barrier, but the actors ’involvement, passion, dedication to creativity shows that anything is possible. It’s a great experiment for me as a director. Sharing his experience, A. Zagoraev notes that he had not previously believed that theater could be created remotely using technology and still doubted whether it is the same theater.

„But I have no doubt that the new experience will be very useful for me. I want to believe that the pandemic will end and we will be able to get back on track. After all, it is very important to feel the lingering energy on stage and in the hall. You can work remotely, but working „live“ here and now is simpler, more productive and more purposeful. “

According to the head of the theater, the play “The Little Prince” had previously be seen on the stage at the Alytus City Theater, but this time it was curious to find out how the work was interpreted by a director from a foreign country. 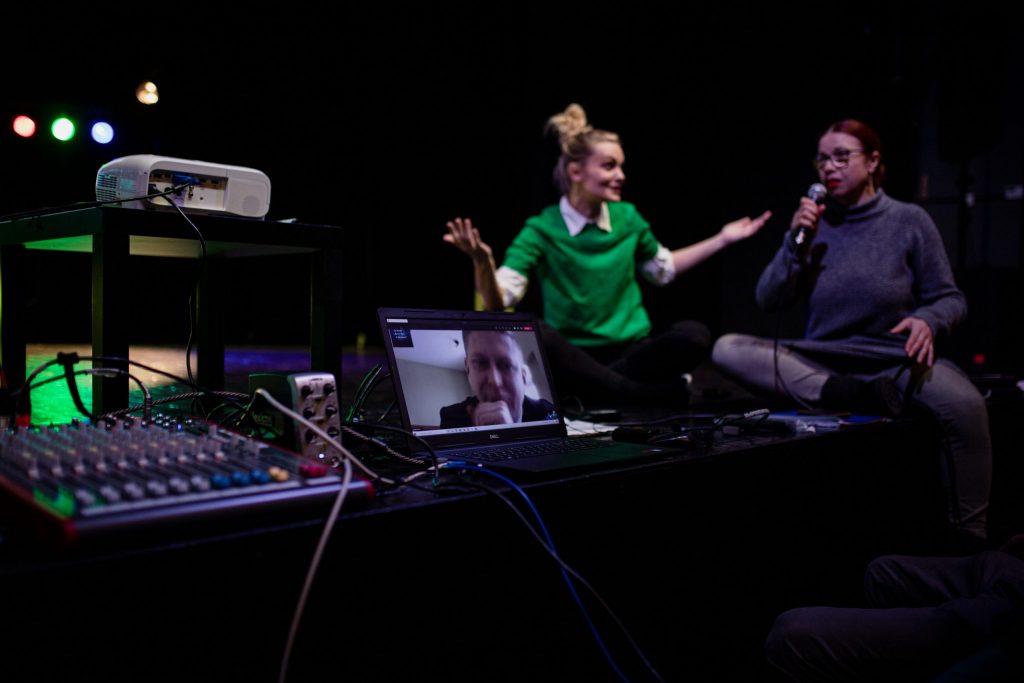 Another stage sketch born in a creative laboratory opened the door to another world of another much-loved child hero. Director Arvydas Viktoras Lebeliūnas, who has staged many performances at the Alytus City Theater, created a theatrical sketch “Winnie the Pooh” according to A.A. Milne’s book. 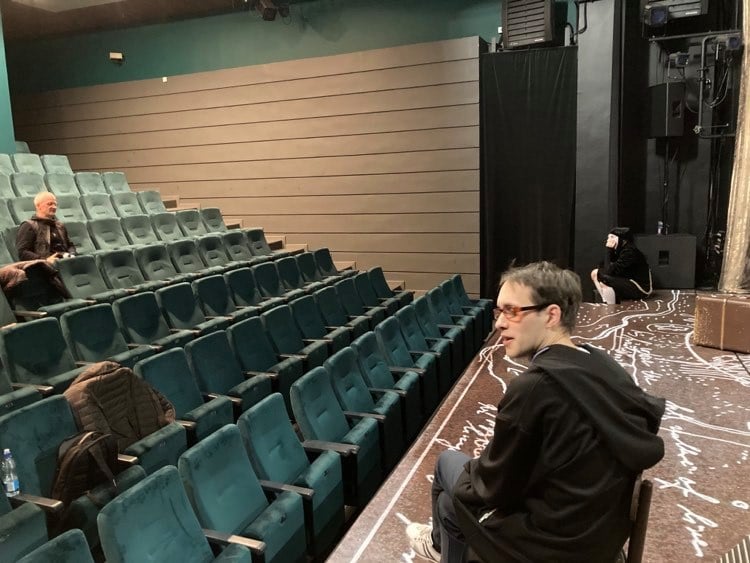 Director and actress Gintarė Latvėnaitė shared the secrets and discoveries of the Baby Theater with the actors. According to her, the dramaturgical material of the sketch “Kū kū kur tu?” (“Hey, hey, where are you?”) Was born during the laboratory. For the actors, it was an acquaintance with a theater of this genre that has existed in Europe for almost four decades. As the director noted, „we didn’t have a goal to create the final product, so the tasks were flexible, what a versatile actor should be – singing, dancing, noticing, mesmerizing.“ 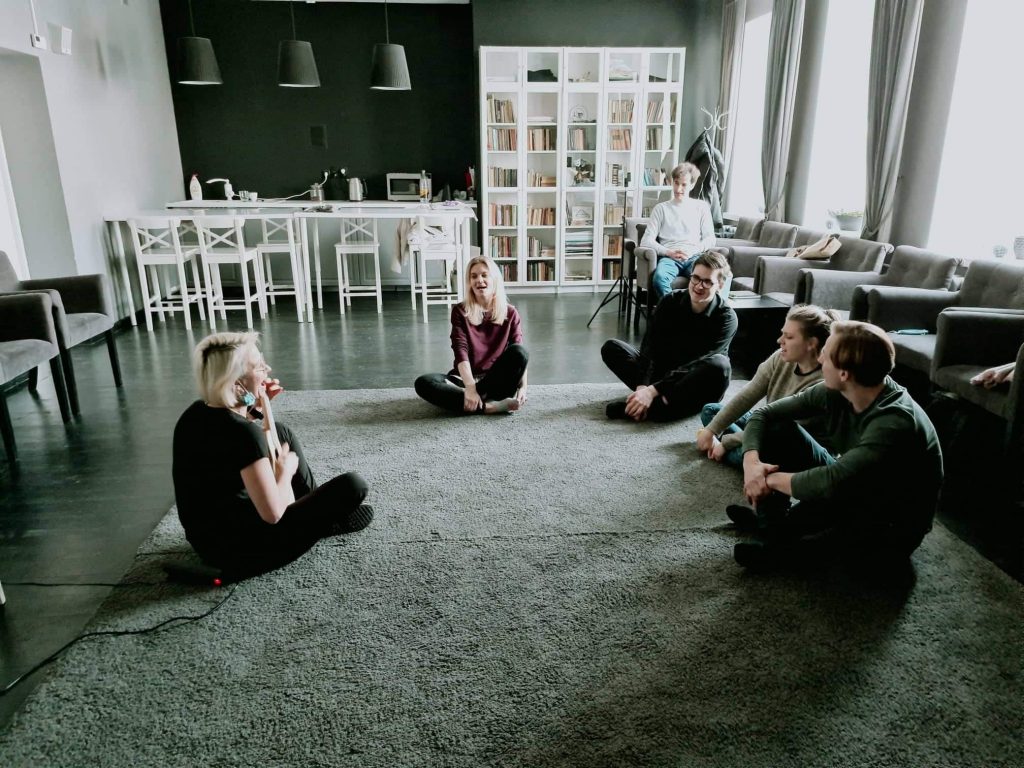 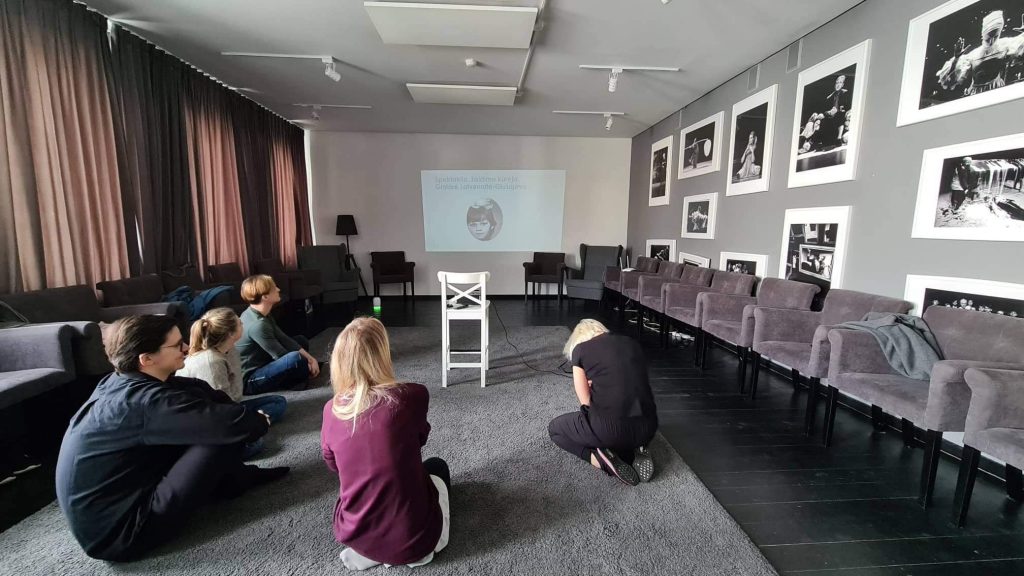 The actors who participated in this lab shared new experiences and impressions that when creating babies, “you first need to look for ways to make a connection. The condition itself is very important, and it also applies not only for the babies. “ Acquaintance with the children’s theater was also useful for other employees who have not had such a project to implement, because there was no performance for the little ones in the repertoire of Alytus City Theater. 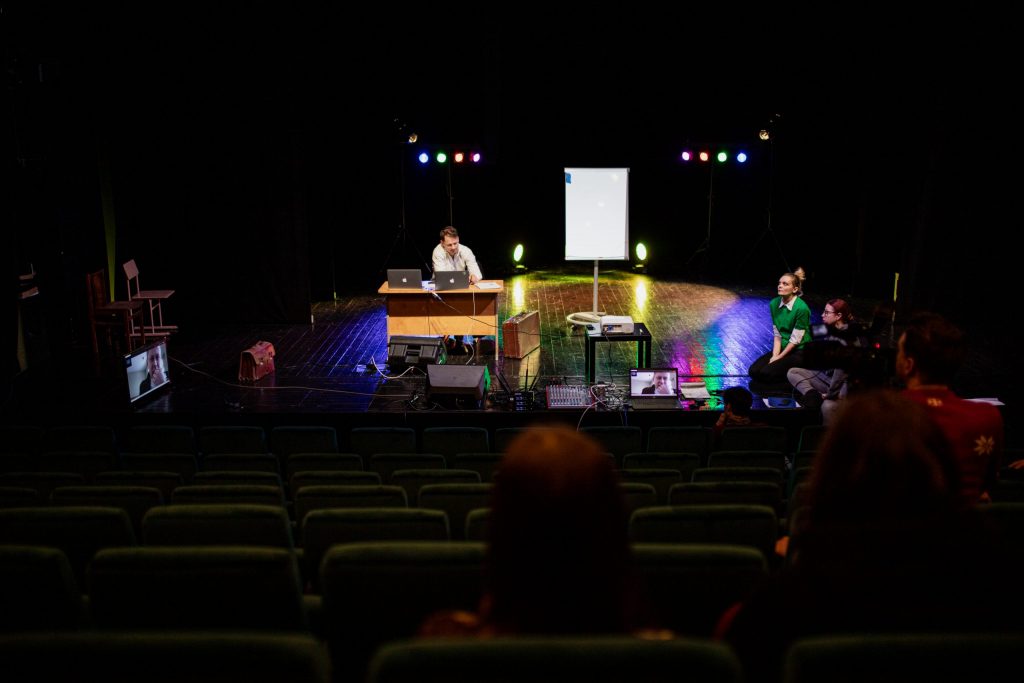 „The idea born in the laboratory may in the future become a performance for the youngest spectators brought to the theater by dad, mother, grandparents or other relatives,“ I. Pilvelytė shares her thoughts. And as you know, the first acquaintance with theater at such an early age opens up spaces for later cultural needs.

It is also possible that some of the stage sketches born in the creative laboratory will not become a performance, but will reach young viewers as excellent creative educations.

The two-year project is being implemented together with partners – Kaliningrad Region Youth Theater „Molodyozhnyj“.