Alytus City Theatre celebrated its 30th anniversary and, as part of the international project “Building Bridges: Tourism and Culture Development in Sovetsk and Alytus Regions”, opened a photography exhibition by photographer Dmitrij Matvejev, which captures moments and actors from Alytus City Theatre performances. At the same evening theatre presented the book “Alytus Theatre” and the film “AMT. Grow by loving theatre.”

Alytus City Theatre, celebrating its 30th anniversary and implementing the project „Building Bridges: Development of Tourism and Culture in Sovetsk and Alytus Regions“, opened an exhibition of photographs by the famous photographer Dmitrij Matvejev. It exposes fourteen portraits of Alytus City Theatre actors and moments of performances.

One of the most prominent theatre photographers in Lithuania has been coming to Alytus to photograph premiere performances for more than a year, and this time the actors visited the photographer’s studio in Vilnius. “I am interested in photographing not only what the director created with the creative team, but also behind the scenes. The actors are also people, so I photographed people…,”says Matvejev, noting that in smaller theatres he feels more closeness and communion.

A history of three decades

Two hundred pages, many pictures, stories and memories of theatre people who have always been near it and contributed to the creation of the theatre history. A book, still smelling of paints, with theatrically black cover on which is written „Alytus Theatre“, reached us on the thirtieth anniversary of the theatre. This is a dream came true – this book merged history of the past and the present. The author of the book, Darius Babijonas, shared his thoughts of the book: “The most interesting things are not in the book, just like things that happen behind the scenes. The birth of the book began when the coronavirus was somewhere near us, and now, when the book is already finished, it is no longer affected by it,” said Darius Babijonas, who talked to everyone who contributed to the birth of the book by sharing theirs thoughts and photos.

“It was a lot of fun to work. Thanks to everyone who talked with me in the city park, in the editorial office. Those records have not been deleted yet, they are surviving, and they are hours upon hours… I kept some of the emotions and details of the conversation for myself. “, – the journalist Saulė Pinkevičienė is thankful for people trust. She remembers that she knows  Alytus Theatre from the very beginning, working on book, she understood even more clearly how much you need to go to achieve what is now and how important it is to protect it.

In this cosy evening, the book „Alytus Theatre“ was presented to guests and theatre staff.

“AMT. Grow by loving theatre”- the so-called film about Alytus city theatre reached audiences and theatre lovers. During the beautiful jubilee evening, the audience was invited to watch the most beautiful and significant moments of the theatre’s life. There is always a lot to be said for looking back, but it was not easy for the filmmakers to „fit“ it into a few minutes of film. The actor and pedagogue Jonas Gaižauskas, who stood at the origins of the Alytus city theatre, was like a symbol of the growth of this theatre, whose immortal walk along the way of the theatre was like a parallel to the theatre itself. After all, theatre is the people who work and create in it.

After passing the stages of creation, development, survival, establishment, Alytus City Theater is boldly moving into the future, not afraid to dream, but to make dreams come true. We would like to thank the filmmakers Inesa Pilvelyte, Jonas Gaižauskas, Alius Mikelionis for the revealed and presented journey of theatre growth and maturation. After all, it is very important to grow by loving theatre! 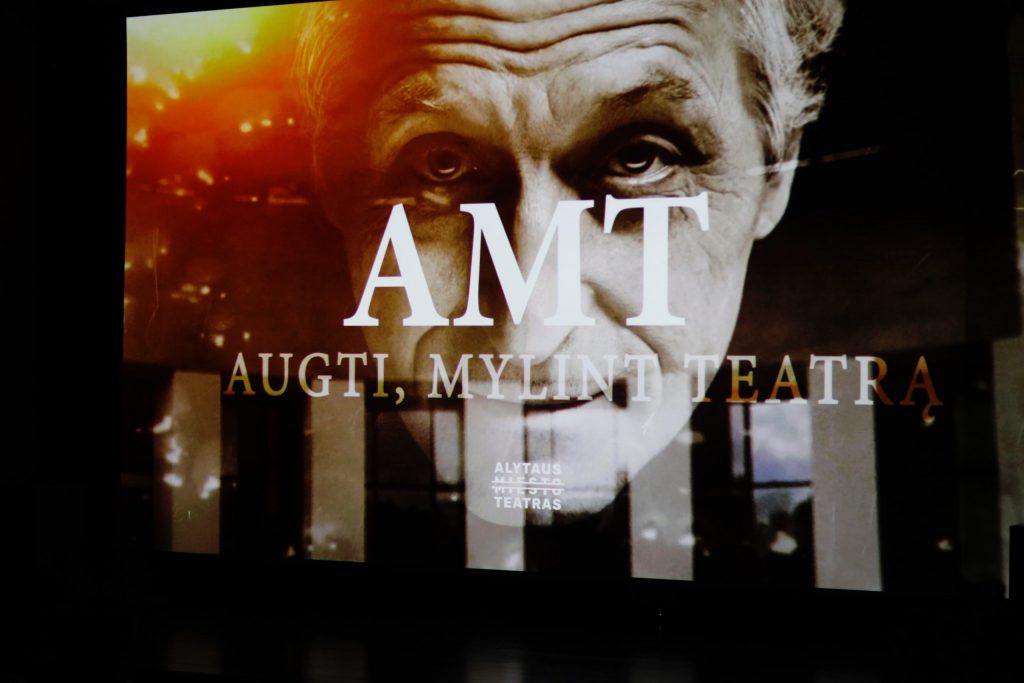